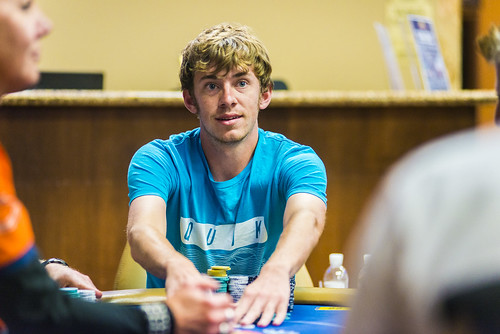 The competitive spirit in an athlete is something that can’t be coached. Either you have it or you don’t. It can take years for one to fully develop in their sport but some people call it quits during the development process. Those who have that competitive drive usually see it all the way through unless there’s a career-ending injury. Sometimes, the urge to compete is so strong that athletes aren’t satisfied with just chasing dreams in one sport. Chris Brewer wasn’t content with wrapping up his run in sports in track & field. He saw a major opportunity in high-stakes poker.

Brewer competed in both outdoor and indoor track & field at the University of Oregon. Prior to his college career, Brewer had been a finalist in the 1,600 meters run twice at Ranch Buena Vista High School. Brewer was able to earn a spot in the U.S. Junior National Championships during his redshirt year in college. He competed in track & field all the way until his final year in college in 2016. In his final year, had an eighth-place showing in the Bill Dellinger Invitational. With his collegiate run behind him, Brewer decided that it was time for a new chapter.

Brewer has since transitioned to the world of high-stakes poker. For Brewer, the move was a no-brainer. In comparison to the rigorous schedule of cross country, poker was quite easy-going for Brewer. The move has paid off for Brewer in the literal sense. Back in May, he won the $10k High Roller tournament. He also won $113,400 in the Aria High Roller series. Brewer bested 21 other participants in that series. If that wasn’t enough, Brewer garnered $1 million in earnings, which sits him in third place on the 2021 USPO leaderboards. It’s been quite a smooth transition for Brewer.

Brewer was asked about bringing in the discipline he learned from track & field into the world of poker. Brewer admitted that he finds high-stakes poker to be far easier than doing cross country. He feels poker is more relaxing than having to run 15 miles every morning. The stress of cross country may have helped Brewer’s transition to poker. Given that track & field gave Brewer anxiety, the easy-going nature of poker is a breeze in comparison. Brewer also says that one big difference between poker and track & field is that poker isn’t 24 hours, seven days a week for him.

The former cross country collegiate athlete isn’t necessarily high on setting goals in poker. Brewer expressed his belief that since poker is very much luck-based, setting goals can lead him to dangerous territory. He’d rather just be confident in his play rather than worrying about things he can’t control.

While poker has proven to be more relaxing than cross country, Brewer has still had his fair share of exhaustion. Before being active in high roller tournaments, Brewer was grinding cash games. Brewer admits that when cash games are going well, there’s always the need to keep playing. He feels it’s a vicious cycle that leaves him burnt out. He enjoys the more scheduled approach to tournaments. He also finds tournament play to be more enjoyable. Brewer was able to better prepare for live tournament action with his consistent play in online events.

Doing well in one sport is already difficult, but making the transition to another sport is a whole new world. It isn’t often that you see someone trying to make the change, to begin with, but it’s even rarer for the move to be successful. Brewer is defying the odds. Cross country and poker couldn’t be any more different but Brewer has found a way to make it work for him. Many would argue that he’s even better at high-stakes poker than he was at track & field. Brewer’s decision back in 2016 may have been the best one of his life.